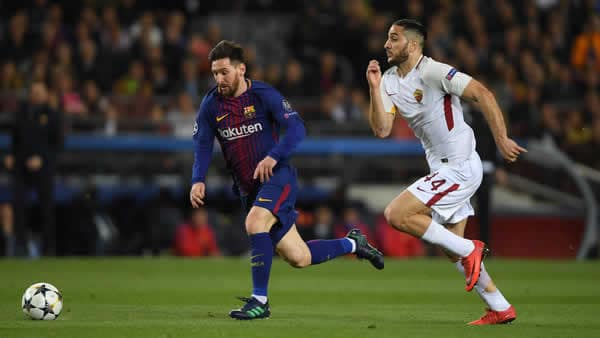 The Champions League quarterfinals wrap up this week and there is one storyline everyone is waiting to see play out. Before the quarterfinals began, most USA friendly soccer betting sites had Manchester City beating Liverpool and Barcelona beating Roma. As far as the other 2 matches go, most analysts picked Real Madrid to beat Juventus and Bayern Munich over Sevilla. While some of these second leg matches already seem predetermined, there is still room for an upset.

Tuesday’s matches have Liverpool traveling to Manchester City and Barcelona heading to Roma. Prior to the Manchester City – Liverpool matchup, sports pundits and betting analysts alike had the soon-to-be-crowned Premier League champions defeating Liverpool. However, Liverpool had already beat City at Anfield once this season. With their quick pace in attacking 3 Roberto Firmino, Mohamed Salah and Sadio Mane, the Reds are quite a handful.

City may be in great form, but they’ve shown they’re not unbeatable. Liverpool controlled their first leg match and scored 3 goals in the first half. City attempted to muster their strength back, but couldn’t get anything together in the second half. They are coming off a loss to Manchester United over the weekend, though it appeared they rested key players in preparation for Tuesday’s match. If Liverpool scores an away goal, that means City needs to score 6 goals to win. It may too deep of a hole to climb out of.

Roma find themselves in an even deeper hole. They lost 1-4 to Barcelona in the Camp Nou. They conceded 2 own goals to put the La Liga champions up 2-0, then Gerard Pique and Luis Suarez netted to make it 4. It is a positive sign for Barcelona that Suarez scored since the Uruguayan striker has been on a goal drought for some time now. Roma’s Edin Dzeko scored a late consolidation goal, and being an away goal it could mean something, but Barcelona may be finding a rhythm heading into the second leg.

Juventus and Real Madrid faced off in Turin for the first leg and it turned into a nightmare for the home side. Cristiano Ronaldo scored in the third minute of the game to open things up. In the second half, Ronaldo scored again on an incredible bicycle kick. Paulo Dybala, Juventus’ sparkplug, managed a red card in the 66th minute after 2 harsh tackles. Marcelo put Juventus away with a strong goal in the 72nd. That makes 3 away goals for Real Madrid. The only way Juventus can escape this stage is to score 4 at Madrid while keeping Real scoreless. This will be a tough task for the Italian side, as Real is closing down on its third-straight Champions League title.

Bayern Munich didn’t perform as strong as they should have against Sevilla in the first leg, but they still emerged victorious. Honestly, Sevilla looked the stronger side at times, but Bayern has too many talented players available. Now that they have clinched the Bundesliga title, Bayern can focus their efforts on the Champions League. Bayern also scored 2 away goals in the first leg, putting Sevilla in a tough spot.

You can bet on any of these second leg matches using licensed soccer betting sites. The best wagers are on Liverpool, Barcelona, Real Madrid and Bayern Munich to advance. There have been sizeable comebacks in years past, but the only comeback we see as being possible is Man City against Liverpool. The other matches are practically a sure thing.