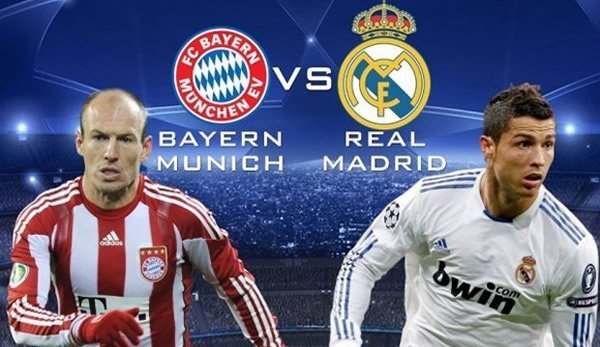 Bayern Munich face the defending champions Real Madrid in the semifinal stage of the UEFA Champions League. The German side hosts Madrid in the first leg matchup of what should be an interesting set of games. This is a rematch of last year’s quarterfinals and a classic rivalry between two of Europe’s best teams. For domestic bettors looking at soccer betting in the USA, the sportsbooks see Bayern as the favorites to win this first leg. This is a testament to the strength of their squad and the fact they are playing at home.

Real Madrid have been playing well throughout most of the Champions League. They just defeated Juventus in the last stage and while having a dominant performance in the first leg, they nearly botched the second leg and allowed Juventus to catch up on aggregate goals. Cristiano Ronaldo will be vital in today’s match. The all-time leading Champions League scorer does not have to deal with Manuel Neuer, arguably the best goalkeeper in the world, who is still not recovered from a broken foot. However, backup goalkeeper Sven Ulreich has enjoyed strong performances all season long.

Other players will need to step up as well for Real Madrid, most notably the backline. Carvajal, Varane, Ramos and Marcelo typically make up a stout defense, but they will be up against a healthy Robert Lewandowski and Thomas Muller, two mercurial attackers for Bayern. Gareth Bale will likely not start for Madrid, and the Welshman is even being linked with a move to Bayern in the summer, but he could feature as a substitute in the second half.

For Bayern, this game is a shot at redemption. They lost in controversial fashion last year after Arturo Vidal was red carded, giving Madrid an open shot at beating them. James Rodriguez is on loan from Madrid and is seeking to prove to his former manager and teammates why he should’ve stayed. Defender David Alaba is out of the first leg matchup. This is a significant loss for the Germans, but they have enough depth at the backline to help them out.

This could be the last chance for this Bayern squad to make a run at the Champions League. Most key squad players are aging and there is the promise of better contracts with more money from the Spanish La Liga and English Premier League. Bayern hasn’t won the Champions League in several years and some players may look to greener pastures if this campaign doesn’t work out.

Madrid are looking to complete a third-straight Champions League win. They looked shaky against Juventus and face a tough side in Bayern, but the presence of Cristiano Ronaldo always means they have a chance. Los Blancos must keep cool heads in the fierce Allianz Arena in order to go back to Madrid without conceding too many goals.

The winner of this matchup will likely face Liverpool in the final. The English side is running rampant right now through Mohamad Salah, Sadio Mane and Roberto Firmino. Both Bayern and Madrid can’t focus on that until they complete this semifinal stage. Be sure to get your wagers in before the match begins at 2:45 p.m. EST. Most soccer betting sites host point spreads, money line and total bets along with prop and live wagers throughout the match. There are plenty of opportunities to win big off this matchup.