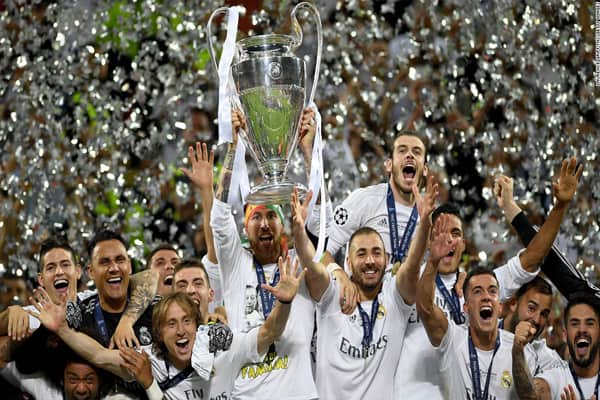 Real Madrid pulled off a three-peat in the UEFA Champions League after a powerful 3-1 win over Liverpool in the final. The final was everything it was hyped up to be with an added couple of twists. Madrid cemented their place in history and Liverpool showed flashes of a promising future, at least in some regards.

The game got off to an early start in terms of action. All eyes were on Liverpool forward Mo Salah and the Egyptian had a bright first 25 minutes of the game. Unfortunately, his dream season came to a bitter end when Salah was tied up with controversial Madrid defender Sergio Ramos. The two players locked arms and fell to the ground. Salah came up injured and was only able to go on for another minute before being taken off. He suffered a dislocated shoulder and couldn’t continue.

Liverpool’s pace slowed after Salah went off, leaving it up to somebody else to pick up the pace. Madrid came close with several attacks but couldn’t seem to get anything though. After halftime, both soccer teams had a chance to regather themselves tactically.

Karius, Liverpool’s goalkeeper, began his nightmare of an evening in the 55th minute. He caught a ball and went to throw it out quickly. However, Karius rolled the ball right across the path of Madrid forward Karim Benzema who was able to deflect the ball into the net. Liverpool was able to bounce back from the atrocious mistake shortly after through Sadio Mane on a set piece. Mane was truly the sparkplug in Salah’s absence and attempted to will his team back into contention throughout the match.

At 1-1, the game was back on. Liverpool hoped to bounce back and get their rhythm after Mane’s heroic goal. Then, Real Madrid manager Zinedine Zidane pulled Isco off to bring Gareth Bale on as a substitute. Bale’s omission from the starting lineup was a continuation of a trend throughout the regular season. Bale has had injury problems throughout his career and has been taken through the ringer by the Spanish press. However, he featured several times at the end of the season and looked great.

Bale’s Champions League final appearance turned out to be the best move of the game. The powerful Welshman scored the game-winner on an incredible bicycle kick goal that will go down in history as one of the best ever scored on the biggest stage. Fans, pundits, bettors and Liverpool alike were stunned at the acrobatic goal. All Real Madrid had to do was hold on for 25 more minutes and they would be champions.

Liverpool attempted to get back into the game. Mane was their best player and had a low shot bounce off the bar on the side of Navas’ goal. Firmino was relatively quiet throughout the game and no other Liverpool players were able to make a strong contribution. Then, Bale struck once again with a long-range shot that honestly should have been stopped. Karius attempted to punch the ball away but it deflected right into his own net.

When the final whistle blew, Karius dropped to the ground in tears, as multiple keeper errors saw Liverpool lose their shot at glory. Bale was heralded as the man of the match with 2 goals as a substitute and Madrid went on to collect their third Champions League trophy in 3 years. Time will tell if both teams remain intact over the offseason, however, Madrid is still the best team in Europe and has proved it time and time again.