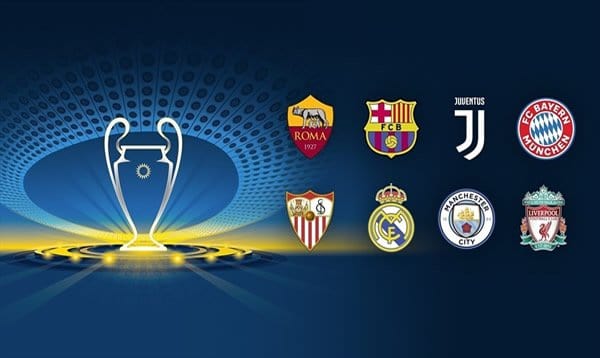 After an exciting Round of 16, bettors can now look forward to the quarterfinal matchups in the UEFA Champions League. The defending champions Real Madrid face Juventus in a rematch of last year’s final. Sevilla are up against German-giants Bayern Munich. The remaining English clubs, Liverpool and Manchester City, were paired up. Roma has to face off against Barcelona. 8 teams are slated for the quarterfinals, but only 4 will progress. If you are betting on soccer from the USA, this article serves as guide for your betting strategy. You can place your wagers using several different USA friendly soccer betting sites.

Real Madrid have been abysmal in their domestic league campaign this season and currently sit 15 points behind league-leaders Barcelona. However, they perform well in the Champions League. Los Blancos defeated PSG on a 5-2 aggregate in the Round of 16. Sure, PSG were without Neymar in the second leg, but Real looked dominant throughout the game anyway. Cristiano Ronaldo had 3 goals in the last round and will surely add to his tally against Juventus. He scored twice in last year’s Champions League final against Juventus. If he can do it on the world’s biggest stage, he can do it again in the quarterfinals.

Juventus demonstrated toughness in their Round of 16 fixture against Tottenham. The English side gave them a fair fight, but Juventus proved too much in the end and advanced on a 4-3 aggregate. Juventus plays host to Real Madrid in the first leg, meaning they’ll have the home field advantage. It also means they’ll need to keep Real Madrid from scoring any away goals. Expect the Juve midfield and defense to put in a solid shift in the first leg. Miralem Pjanic and Medhi Beneatia are out on suspension for the first leg, so Juve’s bench has to step up to fill in the vacant slots, especially with a Real Madrid squad that is looking to capitalize. On the offensive front, Paulo Dybala and Gonzalo Higuain are the focal points and must coordinate effectively to make an impact.

This is perhaps the most lopsided quarterfinal matchup. Bayern Munich is atop the Bundesliga by a wide margin and advanced 8-1 on aggregate. Meanwhile, Sevilla is fifth in La Liga and pulled off an upset against Manchester United in the Round of 16. Oddsmakers have Bayern going through with ease, but it is possible for Sevilla to surprise them once again.

Bayern’s attack is loaded with Robert Lewandowski, Thomas Muller, Kingsley Coman, Arturo Vidal, James Rodriguez, Thiago Alcantara, Arjen Robben and Franck Ribery. Sevilla will have their hands full keeping these players muted, especially in the Allianz Arena. Sevilla’s second leg match against Man United was inspiring with substitute Wissam Ben Yedder scoring twice off the bench, but Bayern is one of the toughest opponents they could’ve gotten in this draw. It will likely take a miracle for them to advance, but the all-time leading Europa title winners are riding the momentum in the quarterfinals.

Many find it odd that the only 2 English clubs left got matched up in the quarterfinals, but there is no getting around it. Managers Jurgen Klopp and Pep Guardiola are no strangers from their time in the English Premier League, and they’ll both try and use their familiarity to their advantage. At the moment, City is firing on all cylinders. They are clear ahead at the top of the EPL table and on their way to another championship. Forward Sergio Aguero’s goal tally for this season is admirable and midfielder Kevin De Bruyne is able to penetrate any defense. However, Liverpool is a quality team when on the same page. They defeated Man City at home 4-3 earlier this year. If Liverpool’s Sadio Mane, Mohamed Salah and Roberto Firmino can link up, City’s defense will be quite busy. The trio have disappeared at times in games, though usually not at the same time. All it takes is one spark to get the Reds going. Oddsmakers have City progressing and they are the current favorites to win the Champions League overall.

The Catalan giants face off with the Italian Roma in quarterfinals. Barca crashed out last year but look to be in much better shape with some fresh faces. Ousmane Dembele shined in the Round of 16 against Chelsea and had a spectacular goal in the second leg. Midfielder Philippe Coutinho looks to be coming into his own with his new team. Of course, there is always Lionel Messi. The soccer-star bagged his 100th UCL goal in the second leg against Chelsea, slotting both of his shots between the keeper’s legs. Barcelona may have lost Neymar in the offseason, but the squad looks better than ever and is expected to pass through Roma with ease.

Roma’s campaign has been strong so far in this year’s Champions League. They made it through 2-2 on aggregate goals and got the advantage with an away goal in hand. Edin Dzeko is the team’s sparkplug and the veteran forward will be a frequent target for the midfield. Other key players to watch are midfielders Daniele De Rossi and Radja Nainggolan.