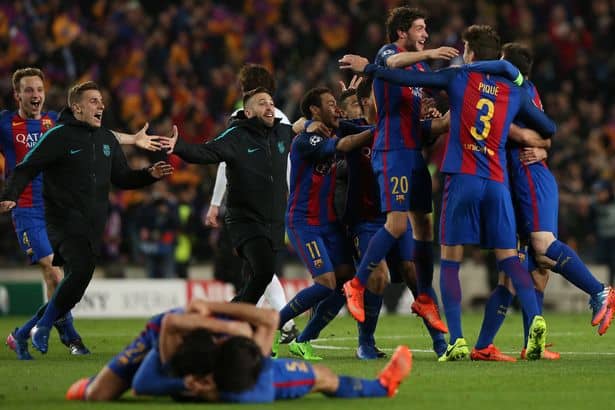 The UEFA Champions League is in the middle of the Round of 16. The second leg fixtures have begun and there was one storyline that didn’t exactly play out like it was supposed to. Paris Saint-Germain traveled to the Camp Nou Stadium to play Barcelona for the second leg of their matchup. The Parisians had a 4-0 goal advantage after beating Barcelona in the first leg. All they had to do was play it safe and ride the game out. Barcelona had different plans, and somehow managed to pull off the greatest comeback in Champions League history.

The game was interesting from the opening whistle, as Barcelona’s attack-minded starting XI started chipping away at PSG’s defensive starting XI. PSG decided to omit Angel Di Maria from their starting lineup, which is probably one of their biggest regrets in hindsight. The Argentinian midfielder was the star of the match for the Parisians in the first leg, scoring two goals and assisting on another.

The Catalans opened the scoring in the third minute with a headed effort from forward Luis Suarez. The ball was cleared from the goal, but it had crossed the goal line so it counted. Barcelona kept pressing, but PSG were able to hold them off for most of the first half. A broken up play towards the end of the first half resulted in Barcelona’s second goal, an unorthodox own goal. The play came off a backheel from Barcelona’s midfielder Andres Iniesta and went into a crowded box. PSG’s Kurzawa made a poor connection and forced the ball into his own net.

At halftime, the energy around Camp Nou was captivating. The home crowd was beginning to rally around their side. PSG had a few wayward efforts in the first half, but Barcelona held the momentum. Once play began again, PSG gave up a penalty. Lionel Messi converted, making it 3-0 on the night. Barcelona was still down 4-3 on aggregate, so they’d have to score two more to win the game. PSG forward Edinson Cavani almost scored a valuable away goal but was denied by the post. PSG finally substituted Angel Di Maria on, hoping to fuel some sort of offense—and it worked. Cavani scored off a fierce volley, scoring a pivotal away goal. Away goals are worth two in Champions League aggregate scoring, so now Barcelona had to score three more times to win.

Barcelona took off Iniesta and subbed on Arda Turan, who immediately made a positive impact with bright passing and crosses. Play stalled until the closing minutes of the game, when Neymar curled a beautiful free kick into the net in the 88th minute. In the 90th minute, Suarez was brought down inside the box for another Barcelona penalty. This time it was Neymar (who was undoubtedly the best player for Barcelona on the night) stepped up and converted it to make it 5-1.

Stoppage time began, and Barcelona went on full out attack mode. They even brought goalkeeper ter Stegen up into the offensive third. Neymar received the ball off a rebounded set piece and ran it closer to the top of the box before chipping it up into the penalty area for whomever wanted to be the hero. That hero came in the form of substitute Sergio Roberto, who managed to stay onside and meet Neymar’s chip in the box and punch it into the net. The Camp Nou erupted in pure joy as their home team did the impossible—scoring three goals to have the greatest comeback in Champions League history.

This game was PSG’s to lose and they did just that. Barcelona were projected to win the tournament at the beginning, then expected to see an early exit at the hand of PSG and are now back in contention to win the whole thing. One thing is for sure, they’ll be riding this momentum into the next round.